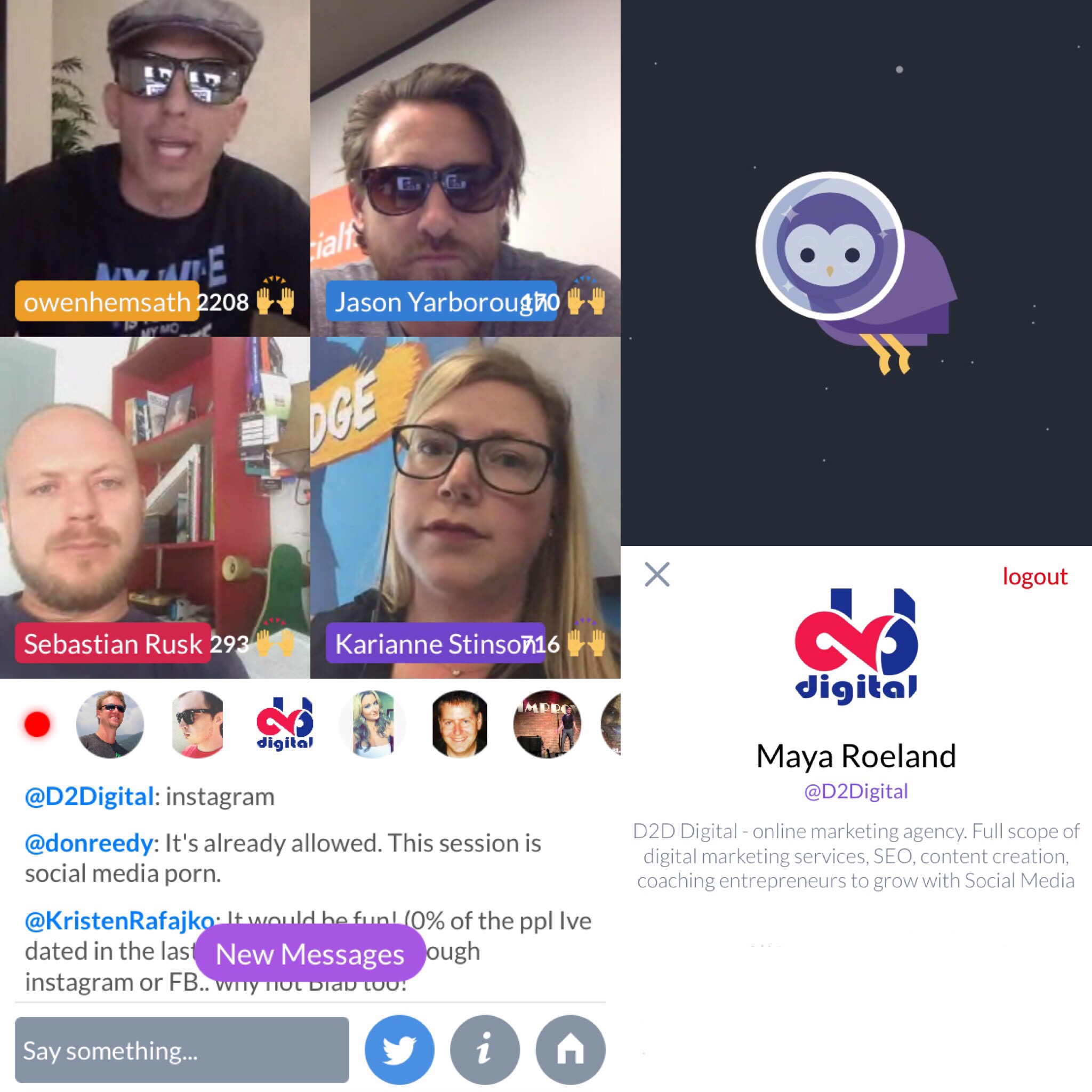 There it is! The app and the website Blab.im, where four people can video chat simultaneously. The audience can watch live, comment and instantly switch places with video chatters. Read this blog post to learn how you can strengthen your social media identity via blab.

To participle as a video chatter in one of the squares — which I can’t help thinking looks like a 21st century Brady Bunch panel (translation = very fun) — you sign in with your Twitter credentials. Afterwards, when someone clicks on your name in Blab, they see the handle and bio you’ve already entered on your Twitter bio.

When a new video chatter attempts to join the four-person chat, the creator of a Blab can choose to accept or deny entry. And as the video chat plays out, the moderator can let the live chat disappear into the ether when it’s over, or hit record to save the chat for others to view later.

In a way, the app feels kind of like Meerkat or Periscope for groups. In fact, many users I encountered last night said they were heavy users of both apps, and more than a few users said that they were enjoying Blab more as a social tool.

Another major similarity between Periscope and Blab is the ability to like someone’s video chat box with what Blab calls “feels,” which are represented by the familiar “praise” emoji of two hands raised in the air. When you “feel” someone, that person accumulates a larger number of “feels,” thus giving new viewers a sense of who the most popular of the four chatters might be. However, those “feels” don’t stay with you, they drop back down to zero when you enter a new Blab video chat.

The app’s popularity component is important, because Blab also gives you the ability to mute any or all of the four video chatters. So, for example, if three people are interviewing someone, you can choose to mute the three interviewers and just listen to the answers from the interview subject.

That last example touches on one of the biggest potential uses for Blab: public conversations about important topics. It’s not difficult to imagine a live political debate between four people using Blab, all while commenters on the right side of the streams add commentary, questions and “feels” (indicating who might be winning the debate). The dynamic is already working for several users who have started regular video shows on the site, with a rotating list of video chat guests (a feat that once presented significant technical challenges).

Another use case could hinge on the mobile version the app. Imagine two different people in a Blab simultaneously taking viewers backstage at a concert and shooting the stage from the front as the two other video chatters narrate what’s going on.

Yet another use could be music collaborations from remote locations, with a person singing in one location while being accompanied by a musician in another. Think that’s a little ambitious? It’s already happened on the site. I even saw one Blab video chat in which three people were watching and commenting on an MMA event, proving that the app has potential as an easy way to host and watch a wide array of live or recorded events with groups while adding real-time commentary. Imagine your three favorite TV reviewers watching the finale of your favorite show with you in real-time, responding to your sidebar text chat reactions. It doesn’t get more social than that.

Moderators of a Blab video chat can also schedule Blabs for later dates, making the notion of Blab appointment-viewing that much easier.

Additionally, because the app has tied itself so closely to Twitter, it’s extremely easy to share links on Twitter to a particularly popular Blab video chat, thus increasing the potential virality of any high-profile Blab video chat.

And while there are already group video chats services like Google Hangouts and Skype’s group video call feature, what makes Blab attractive is its focus on social networking and bringing the Twitter community closer together through video. It’s also (at least so far) a lot easier to use than the aforementioned services.

Currently, there are there are only two topic channels: Tech and General. But there’s already a fair bit of activity on both, with a growing list of archived Blabs near the bottom of the home page.

The video and sound quality aren’t pristine, but they’re good enough for as much detail as you’d need for a casual chat.

Available online (no Safari functionality, but Chrome works fine) and as a mobile app for iOS (on the Blab site, not yet in the App Store), Blab is still in beta, so some of the features I saw last night may change in the coming days and weeks. Nevertheless, I was impressed.

But even as a beta product, Blab is pretty addictive. Hopping from room to room to meet new people (yes, this could also turn into a blind date app of sorts) is pretty fun. Whether Blab can weather the storm of competing video streaming apps currently flooding the market before being copied or outright acquired by bigger players, even while it’s still in the starting gate, remains to be seen.

In the meantime, if you want to start convening grand councils on your favorite topics, Blab (beta bugs and all) is the easiest and most social media-friendly solution I’ve seen. Oh, and the people are really nice, too.